Things that leave me puzzled in the Kingdom of Wonder 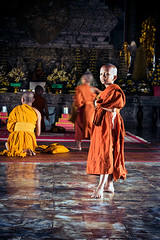 So I believe I am finally getting over my culture shock but I'm still struggling to find words to describe this Kingdom of Wonder, even though I feel I haven't even seen a lot of it yet. It's a fascinating country but both strangely forbidding and attractive at the same time.

Whenever you go to see a tourist attraction, within minutes there will be an adorably sassy bunch of kids gathering around you to be your personal tour guides. They will ask where you come from, only to greet you with an impeccable "G'Day mate!" or "Hallo, wie geht's?". No doubt they've got more than those; I think should try them next time. They will inform you how many stairs you still need to go, tease a pacing tiger for your amusement, point out and explain everything that's worth seeing on the way and even fan and offer to carry you (I wonder what would happen if I took them up on that...).
Somewhere along the way they will tell you that they go to a private English school which is easy enough to believe judging by how well they're speaking the language. At this point it's just information well mixed in between all the other things they tell you; they will continue the tour and subtly make you feel in their debt. Once the tour ends, they will ask for money to afford the private school... So far I I've almost always given a few dollars but once there where just too many kids so I told them I was out of money. They asked a few more times but didn't get grumpy about it and where still laughing and waving when we left. They said something we didn't understand which might well have been the Khmer version of "F*ck you" but it sounded really nice. Maybe it's just a Western thing to think that people get upset if you don't give them money. Or maybe they're just really good at swearing with a smile on their faces.

It's easy to feel like a "walking white moneybag" and you never quite know if people expect you to pay them for any help even if they don't get upset if you don't. There are beggars everywhere, sometimes sitting in the middle of the walkway so you literally have to step over them or next to a pile of smelly trash exposing missing limps — there still are (http://www.seasite.niu.edu/khmer/Ledgerwood/Landmines.htm)[a lot of land mines around] from three decades of war. Other times it's a cute girl getting you to give her a pinky swear that you will buy a bracelet only from her. And just try eating a meal with a bunch of kids standing around, waiting for you to finish so they can ask for the leftovers.
Oh and that strange feeling when you haggle down your fine for -looking rich- [insert offence here] with the local police. I even robbed Corey of almost all his money while he was talking to the police guy so he got away with a $5 fine (plus some Thai Baht) instead of the $70 originally requested because that was "all he had". I guess having a second wallet would be a good idea for those situations; with the drivers license in it but hardly any cash. No money, no honey. On the other hand, there's a girl at the night markets that always adds some free goodies to our order when we get fried ice cream at her stall. How nice! And how odd how puzzled this leaves me in a country where everyone seems to be after your money. 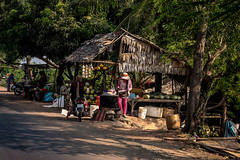 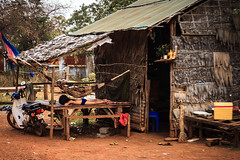 Once you leave town and visit places just a little bit off the beaten track people will stare at you a lot. Apparently it's not impolite at all here; everyone does it. It can get to the point where it just feels odd but they also give me the brightest smiles and even wave back once I smile at their stares which truly feels great. Often they will come up asking you to take photos with them and add them on Facebook; I guess my blonde hair has a lot to do with that but Corey, the "Handsome Foreigner", as they always call him is getting a lot of attention, too (including from guys). Sometimes people shout things like "Wanna sleep with me?" other times they just walk up to you, ask how old you are in the first and if you have a Cambodian boyfriend in the second question. Certainly no beating around the bush here! But for some reason I find that easy to handle because I know what they're up to straight away and they never get upset if you tell them that you're not interested. Instead they usually ask a few more questions and then wish you all the best for your future which feels really nice. I've had some interesting encounters this way that left me very puzzled in a good way.
One time a girl came up to us (accompanied by the whole family) to take photos and told me how beautiful I was. Her husband asked me if I was interested in a Cambodian boyfriend and when I said no he wished me well and said that he would be there if I ever needed him. (I feel like leaving a lot of white space here to illustrate how blank my thoughts went about this.) Another time a guy asked me "So you came here with your boyfriend?" and when I confirmed: "Only one?".
I can't help the feeling that there's a major cultural difference here. I would love to understand more of whatever their deal is and I bet there would be quite a bit that the West could learn from their view of things one way or the other.

Which reminds me: we've seen this great movie "Same same, but different" which is about a German backpacker falling in love with a Cambodian girl in Phnom Penh. It's based on a true story and I think it illustrates the whole feeling here quite well, so if you're interested in this strange place (or in a nicely troubled love story) I highly recommend watching it.