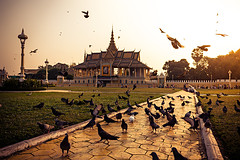 I've been in Phnom Penh, Cambodia, for about over a month now and it's just hitting me. I know my negative focus at the moment is due to the culture shock so even though I'm missing Australia very much right now and have a hard time remembering why I ever wanted to do this, I've got good faith that I will get used to it all eventually and start to enjoy the good sides again like I did in the beginning. And that I'll have some good stories to tell afterwards.

But right now I feel foreign. I'm certainly not blaming Cambodians for not speaking English, but sometimes I'm just tired of trying to make myself understood with hand and feet and the handful of Khmer words that I've picked up so far. And it can get very exhausting if beggars turn up everywhere you go, no matter if you're sitting in a nice calm spot watching the sunset or sweating in the traffic at the red light. I've read you shouldn't give them any money because it will probably just be used for drinking or gambling. If anything, give them food and open it beforehand, otherwise they might just sell it. And apparently you should completely ignore kids, because giving them anything will encourage them to stay out of school to beg or sell bracelets or whatever. Now try and keep your resolve every ten minutes or so when the next cute witty kid rocks up and asks you where you're from just to greet you in your language. They can be very subtle, too. One minute you're enjoying a nice conversation with a local that is practicing his english, the next minute they're trying to sell you something. Especially if they saw you rocking up on that expensive 200cc Porsche, erm, motorbike. If you're white, you've got money and in touristy areas they'll try and get it from you.

Then there's the trash and the smells. They say you just have to look past that to see the people that are happy and friendly with so little. Indeed, the locals are very friendly and usually very helpful but there really is a lot of trash to look past. It's littering otherwise beautiful sceneries and piling up against the walls of newly built licked-clean fortress-like holiday villages for the rich. Some knocked-up wooden dwellings of the locals right next to the piles with their cows grazing in the muck. Sweat and trash and dust wherever you go. Even the sunrises look incredibly tired through the haze. 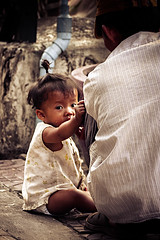 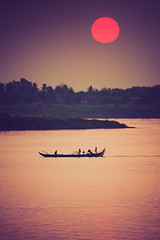 And there's a peculiar mix of crumbling, black stained buildings that immediately fit the image of communism in my head on one side, and new ambitious buildings springing up everywhere on the other. Big new soulless shopping malls with levels and levels of empty space. And maybe a few lost clothes and electronics shops that seem to belong to local markets rather than glamorous shopping malls. A sleepy and lifeless night market next to one of the new, empty shopping malls as a shallow copy of the vivid night markets in the city and just as soulless as the shopping centre. If that's not enough of the mix, there's Khmer modern architecture, traditional Khmer stilt houses, French style boulevards and colonial buildings, huge Chinese bakeries in the middle of nowhere, and Japanese gimmicks like matcha-green-tea hair colouring and crazy contact lenses everywhere. Usually I enjoy the mix but the chaos can mess with you while culture-shocked. 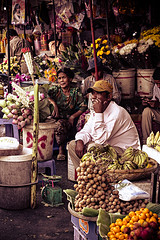 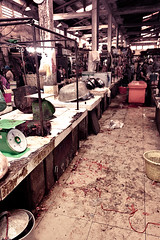 I still like the smelly but vibrant local markets where haircuts are given next to meat selling stalls and where you walk through undefinable muck that will have your shower water run black later (flip flops not recommended). I even got used to vendors right out ignoring you to save face if they don't speak english and my stomach doesn't go funky from local food anymore. But I have a hard time finding the things I need, like leave-in monthly contact lenses, affordable non-noodle-or-rice-food every now and again or a proper motorbike helmet that actually fits. I'm pretty darn proud that I got used to the crazy but relatively slow traffic in the city by now. You know that I used to freak out about the thought of driving anywhere by myself just half a year ago, right? But the traffic out of town is just killing me. Praying to Murphy that he doesn't take the pun literally!
The rich of the country with their ridiculously big cars in the oncoming traffic just overtake and give a f.ck if you're on the road frantically flashing your lights to indicate that you're not just a slow scooter. With a bit of bad luck you're forced off the road into the dirt at maybe 50km/h (if you get a chance to break at all) which will make the rear wheel break out. You probably can't slow down any further though, because there's a good chance that the car behind you was forced off the road too and can't slow down as quickly as your motorbike (or doesn't want to) and will honk the horn like crazy to tell you to keep going. Welcome to Asian traffic.