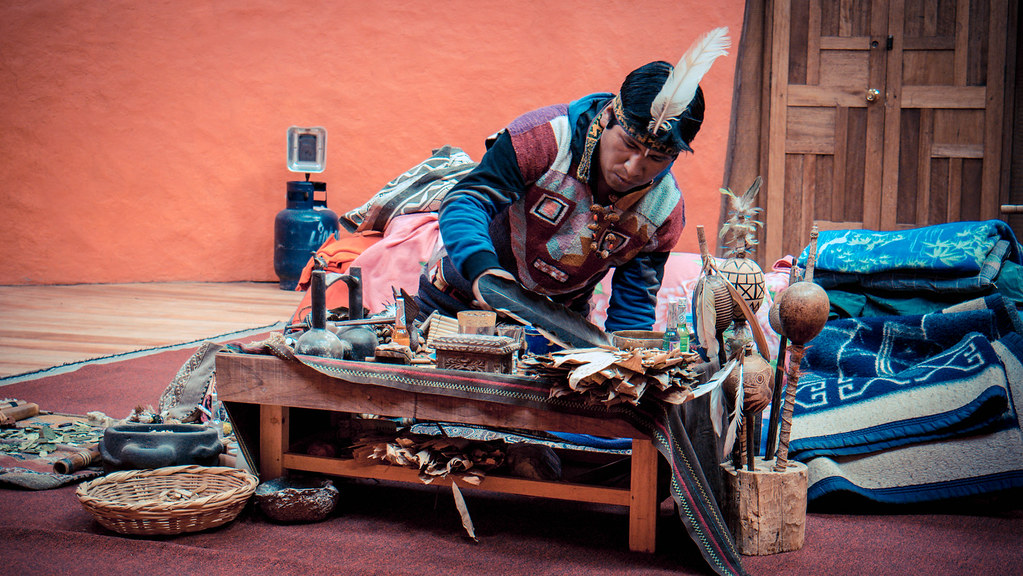 The Shaman
5 years ago by Tina Reymann

A few days after arriving in Cusco we did a traditional San Pedro ceremony in the surrounding mountains. We were brought up to the Shaman's place early morning and found ourselves in a nice sunny backyard with a great view, a beautiful Maloca and other shamans and families around. The energy there felt just great. I loved the Maloca with its rusty-red painted walls and the shaman's table in the middle; beautifully overladen with all sorts of mysterious looking tools.

There were just the two of us in the ceremony which made everything more personal and close. We were given a glass of green stuff each to drink slowly while the shaman was singing and talking to us about San Pedro in a mix of Spanish and English. It's meant to open your heart, connect you with nature and help you to just love life. Not that I've ever had a problem loving life but after those Ayahuasca sessions and the following processing time that had turned me into a steaming hot mess for a while, it felt like I could need a dose of that. It took us quite a while to swallow the whole glass of the bitter brew, even though it was a "tea" and we were told that the crumbly consistency was way better than just having pure, slimy San Pedro. We did it though and once that was done, we went out into the sun and waited by the fire while the shamans were preparing the sweat lodge: a stone round just tall enough to sit in it with a wooden structure on top to hold blankets as a roof.

After a little while I started to see the grass moving as if the earth was breathing and it looked somehow less substantial. I loved this feeling that made it so easy to believe that reality was just a thin layer of illusion on top of the essence of everything: energy.

Another Australian/German couple arrived and a Peruvian guy who would join us for the sweat lodge. We sat down on leaf mats against the wall of the small round. Two shamans were in the lodge with us and following their lead we sang to welcome the fire spirits while red-hot stones were brought inside. The older shaman threw herbs onto each new stone which lit up in little crackling sparks and turned into fragrant smoke.

We sat in total darkness and each of us was given an instrument to accompany the shaman’s icaros. The whole setting felt absolutely beautiful and sacred. I can't tell if that was just the ancient ritual or the San Pedro; probably both. I was shy using mine at first but I had a feeling that I, too, matter. I even started humming along with that feeling that I’m worthy of being heard, that I’m part of the whole and that it doesn’t matter what my voice sounds like because it sounds exactly the way it’s supposed to. Whatever I did was exactly what I was meant to do and added exactly what it needed to add to our little round; which aren't thought that usually cross my mind. I felt at ease and very grateful to experience something ancient like this that looks so strange and “esoteric” to a Western mind.

We did four rounds of sweating with short breaks in between and when we were finished the day was well into the afternoon and a storm was brewing on the horizon. So we had to hurry up a bit for a baeutiful walk through the mountains and outskirts of Cusco to get back to the Central Plaza. The rain got us but it didn't matter since everything just felt good. The shaman left us at the Central Plaza where we hadn't been before and I only knew roughly how to get back to our guesthouse. It seemed like a good adventure, so we just headed off and tried to find it. It was Sunday afternoon and slowly we began to develop a headache, but still were in high spirits. By the time we reached a place we reckognised the sun hat set and the headache had gotten worse. Altitude sickness. It probably hadn't been the best idea to do a sweat lodge at over 3500m without drinking too much (we later figured that how much you drink seems to have a huge impact on how badly you feel the sickness). The shops were closed though and we had only water to drink — no electrolytes and no painkillers. We went to bed early but by then my head was pounding already. We hardly slept and it still got worse until it turned into the worst headache of my life and sleep was impossible.

But I finally remembered that one could make a drink for rehydration with sugar and salt. It was late at night and even just walking down the single flight of stairs to the kitchen was a challenge. I managed to find salt and sugar, and even going back up the stairs. The drink did help a lot. The headache didn't go away but it went from 'are-we-gonna-die?' back to a gentle pounding that allowed us to go to sleep in the end.